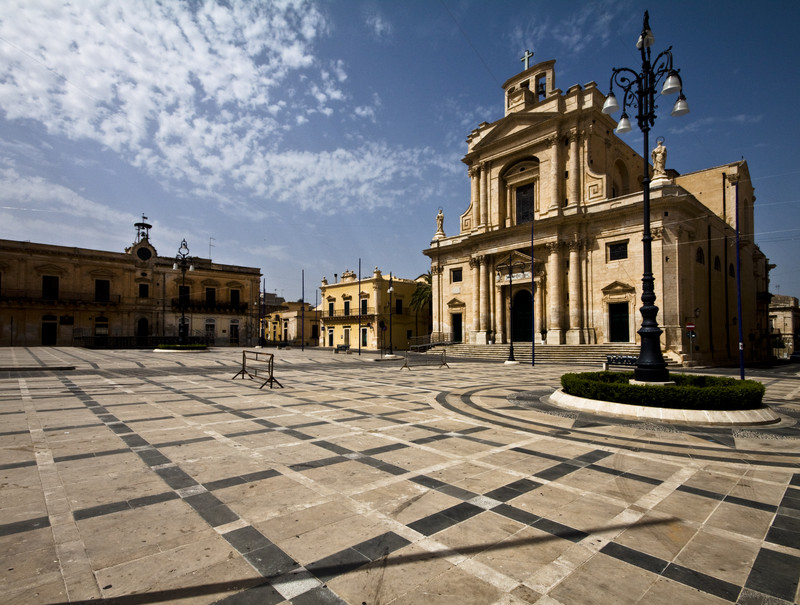 The town
Rosolini is a town in the Province of Syracuse, on the southeastern foothills of the Iblei Mountains, developed along the rocky cliff overlooking the SS115 road. In the early twentieth century the archaeologist Paolo Orsi defined it as “a picturesque terrace” where for thousands years people continued to settle and live. The territory is rich in archaeological sites and quarries dating back to the Greek and Roman periods. Rosolini is known as “the City of the carob tree and the Sacred Heart” thanks to the rich presence of carob trees scattered throughout its territory, and the Shrine of the Sacred Heart of Jesus, a place of pilgrimage. The Patron of the town is Saint Luigi Gonzaga. It is a very interesting city, both from the artistic point of view (the Cathedral of San Giuseppe, built between the XVIII and the XIX century, the Fontana dei Tritoni in Piazza Masaniello, the Hermitage of Croce Santa) and from the archaeological one (a large ancient cemetery at the Stafenna district, within the Cava Grande di Rosolini area). Of great importance are the Castle of the Platamones, built in 1668 and still preserving inside an early Christian basilica (5th century), and the Mother Church (18th – 19th century). Also the archaeological site of Cava Lazzaro is very important, with its Bronze Age necropolis. Its main activities are agriculture, cattle breeding and handicraft. It prevalently produces greenhouse vegetables, citrus fruits, almonds, carobs and olives and there are cow, pig and sheep farms. Wooden items are very nice and locally made.

Curiosity
In 2014 Rosolini was the main set of the movie produced by Ficarra and Picone “Andiamo a quel Paese”, but the real name of Rosolini in the fiction has been replaced by Monteforte. In 2015 the city will host the filming of “Cor Jesus Mecum Est”, the documentary dedicated to Mother Carmela Aprile and the foundation of the Shrine of the Sacred Heart. The name of the town comes from the Latin Rus Elinorun”, meaning the place where rises Elori, the ancient VII century Siracusan colony. According to mythology, the son of God escaped from the Etna Volcano and there founded the city. The name Rosolini is definitely of Arabic root. When the Arabs conquered Sicily found a decaying Byzantine Empire, and it was not difficult for them to settle peacefully in the area bringing the benefits of their culture. Respecting local religious traditions, the area called “Rus Salib’ni”, meaning “the cave of the cross”, as in the settlement was located a Christian basilica carved into the rock where people worshiped a holy cross.

The coat of arms
It depicts an eagle with spread wings and hooked claws, surmounted by a golden crown, with the shield of the coat of arms of the principles Moncada- Paternò on the chest and with a strip containing at the foot the words “Universitas Rosolinorum Regi benefit” on blue setting. At the center of the eagle stands a woman, symbol of Rosolini, as jumped from the breast of Nea (the eagle is the emblem of Noto). The woman holds a trident, symbol of agriculture, with the right hand, while with the left stops a lion. At the foot of the eagle there is a flowery valley, symbol of the fertility of the land. The background of the emblem is of a ruby red color. This color recalls the name of two districts that are nearly connected: Granati Nuovi and Granati Vecchi. Football players of the local team wear uniforms with this color.

History
Rosolini was a settlement in the late Imperial Roman and Byzantine Ages and a town in feudal times. In the 15th century, Rosolini was a fief of the Platamones, but the inhabited settlement was founded by Francesco Moncada, prince of Lardaria, only in 1713, once he received the feud from his wife Eleonora Platamone.